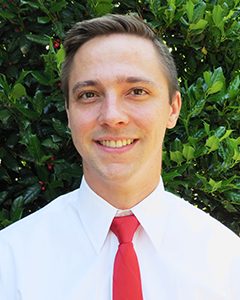 Dr. Tyler Twomley knew he wanted to become an orthodontist at an early age. His experience with braces began at age 8, when he had an expander appliance. His crooked smile earned him the nickname “wavy tooth” from his siblings. By the time he finished treatment, though, he had gained a lot of confidence.

His mother began working for his orthodontist a few years later, and that’s when he really was exposed to the inner workings of an orthodontic practice. He noticed the huge impact it made on people’s lives, and he knew that orthodontics would become his career.

Dr. Twomley grew up outside Atlanta in Lithonia, Georgia, and graduated from LSU in Baton Rouge. He is a huge Tigers fan! He enjoys playing golf and trying out new restaurants, as well as hiking, camping, playing sports, binge-watching his favorite shows, spending time with his wife Amanda — and anything and everything about his two boys, Asher and Abram.

Make an appointment for a free new patient exam today!

We’ll help you take the first step toward a new smile.